Sophie Harle runs her pottery studio from her home in West Brunswick. Sophie is teeny and cool, if she wasn’t so nice she would be intimidating- it could be her edgy (do people still use that word) haircut. You just know she is going to say something wise.

Colin, her dog, likes to spend time with her in the studio.

Sophie works with a long list of Melbourne-based cafes and restaurants supplying them with her handmade wares, so if you drink coffee or tea, it’s likely you have sipped from one of her cups. 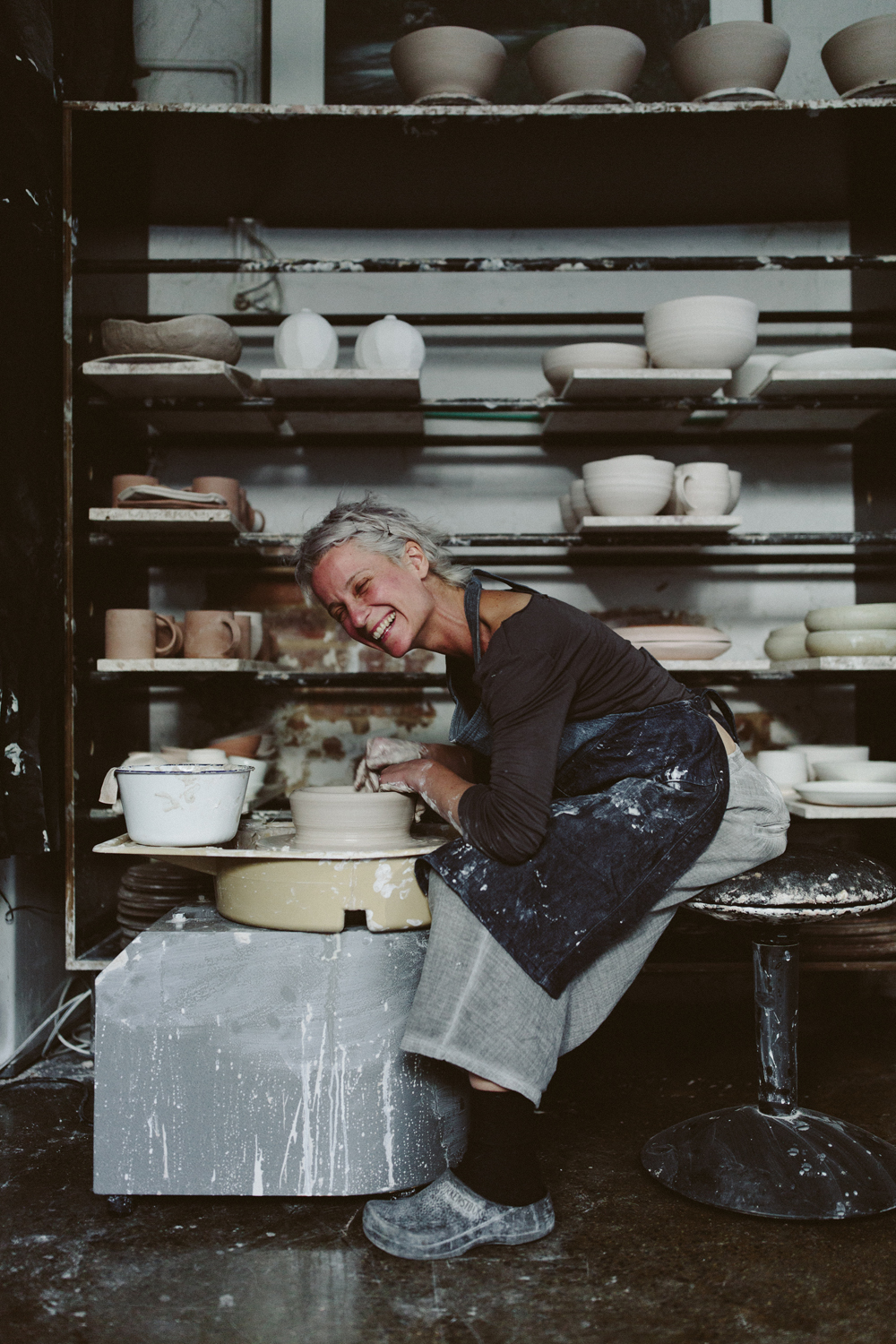 Gorrilla and Co.: When did you first realise you had talent?
Sophie Harle: (Laughing) That’s an odd question because pottery is about practice. Talent is an interesting thing because the notion of talent is not realistic. You need to practice something to get good at something. You don’t innately have talent. You have a predisposition for focusing on something intensely and learning how to do it well, but nobody is born with an ability to throw pots or paint pictures or make music. They have a passion and an interest that drives them to get better at that thing, but I don’t think talent is the right thing. Perhaps it is more, perseverance.


GC: When did you realise you wanted to persevere?
SH: When I first used clay. I was in year nine or year ten in school and made something with clay and thought it was the most amazing material I had ever used, so I had been making stuff ever since I was a kid and my dad is an artist- he is a woodworker and so it was normal for people in our house to make things. It was a process of what is it you want to make? That was what was important in my family to know what you wanted to do, what you wanted to make. My brother liked to add up number plates and now he is a private equity person. He buys and sells companies. You find what you like and you persevere at it until you are good at it.


GC: How many hours a day do you throw?
SH: It changes every day- so yesterday, I collected clay, unpacked a kiln, turned some stuff, put some handles on. I usually start at 10 in the morning, we take an hour for lunch, and dinner watch an hours T.V. and cuddle and then get back to work and then finish around 9.30 or 10.00 p.m.


GC: What is reclaimed clay?
SH: When I am throwing, say I am making white cups here with new clay. And then reclaimed clay is all my leftover bits from turning, scraps and everything. I recycle it all and then mix a bit of other material in to give it a bit more body and then I use it again. I don’t throw any clay out unless it blows up in the kiln.


GC: Have you ever wanted to give up and walk away from this?
SH: There are sometimes where I think it would be so much nicer to knit or sew or do something that is chilled out and not physically demanding and just kind of nice, but pottery is just so lovely, but no not really, I like it too much (laughing).


GC: How have you gotten through it?
SH: Often the feeling of oh it’s too much is when I have too many orders and I don’t think I can get them all done. I am just stressed out and freaking out about how much I have to get done. Then we sit down and write a plan, when are your firings going to be? How is it going to work. Then I calm down and feel a little better. But I have realised that when I have lots of orders doing some fun stuff that I want to do is really helpful. It breaks it up, making some fun stuff as well.